This series of posts will start on Apr 15th 2013 and will post every week for 8 weeks. 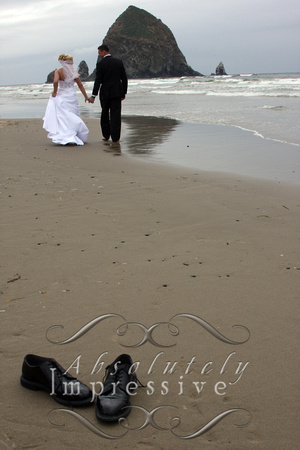 “If they don’t get here in the next ten minutes, I am going to call the owner and shoot them!” the mother of the bride, an older lady dressed in a wonderful pink, professional looking outfit, screamed at her niece. Her niece was obviously flabbergasted, terrified of having to repeat what this woman had said to the person on the other end of the phone. The woman was pacing back and forth because David’s Bridal forgot to include the shoes they had purchased for the bride. Her hands were red and wet, clenched tight. The whole room, the whole environment, felt as though we were 150 feet under water, with pressure collapsing in on all of us.

I had just met this person an hour earlier. At the time I met her, she seemed reasonable and calm. I could see that her daughter was about ready to break down in tears. I was the only one in the room not emotionally connected to this situation.

I asked the bride’s mother if I could help. Through sheer embarrassment, I think, there was no way she could be extremely rude or mean to me, a complete stranger. I asked her niece to bring me the phone she was holding in her hand. I could tell she was afraid to talk to the person on the other end of the line for fear she wasn’t going to say the right thing and become the next victim of her aunt.

I asked the person if they had the shoes there. She said yes. I asked her if she was the store manager, and she said she was the manager on duty. I then politely asked her how quickly she could get the shoes to us, knowing that we were 45 minutes away from the store and the wedding started in 50 minutes. She said it would take 30 minutes before someone came in that could bring the shoes to us. I told her that simply was not going to be “doable”. We needed the shoes and the wedding started soon. She had someone that could leave right away but they couldn’t come all the way out because they were getting off duty, so I quickly arranged for her to have the person bring the shoes half way and I sent one of my staff that was not busy to meet them.

That moment, you could see the absolute frustration flow from the mother’s face onto the floor and soak into the carpet.

The overwhelming feeling of having the perfect shoes made this woman completely become someone that she wasn’t. She had no idea the kind of frustration and pressure she was applying to those around her, including her daughter. It has always amazed me how individuals can self-destruct because of his or her desire to have the “perfect” anything. Our emotions get involved and we start becoming extremely counterproductive. In this situation, the mom was so fixated on her daughter wearing the perfect shoes, that she put herself in a mental state where she couldn’t find a solution.

Television shows and magazines tend to focus on brides being out of control. Bridezilla is a well-known term; however, the infamous bridezilla is fairly rare. It tends to be the bride’s mother or aunt or maybe even the groom who somehow becomes a real challenge because the bride is not getting what they perceived she wants. They know this is her perfect day and they desperately want to make sure she gets everything of which she has always dreamed.

Lee Stern suggests that the easiest way to prevent your family and friends from getting involved emotionally with the behind-the-scenes that go wrong is to hire a wedding planner (21). Wedding planners are not always the least expensive option. However, I have met some wedding planners who negotiated their prices with wedding vendors down to the point where their fee fits into the savings that you are receiving from booking those particular vendors on your own. At that point, the cost is the same.

The other advantage of working with a wedding planner who has a group of vendors with which she or he is comfortable, is that even though they may be coming from multiple companies they are a group of vendors who have more than likely worked together before. Vendors that work well together can really make your wedding go smoothly.

When looking for a planner ask them how many weddings they have done. You want to know if they have the experience you’re looking for up front. See if they have references, but keep in mind that your prospective vendors are not going to give you a reference that they know is bad. Also, you have to wonder if the reference is their cousin. The best way for you to know that this planner is the right planner for you is to just talk to them, see if you feel like they are professional, and they have it together. If they show up to your meeting late and unorganized, you should expect them to handle your wedding the same way. It is also a big deal if you think that they have a bad attitude.

In August of 2010, we had a wedding where the caterer walked up to the bride with a check for $6000 and told her they were leaving before they even finished unpacking. The bride didn’t know what to say but okay. I chased him down and asked why he was leaving and he said he couldn’t deal with the planner she hired. He had worked with her before and it was not a good experience. My team hated her too, but I told her long ago to leave us alone and she got the message. I asked the caterer to wait and see what I could do. I talked to the bride and she agreed to sit in while I talked to the planner. I told the planner that it would be best if she just left and my team (Photographer, Mobile DJ, Videographers and a helper) would handle the event. She was hurt and angry but I cut a deal with the bride. We wouldn’t charge anything to do this and the planner would still get paid. The wedding was amazing and the food was scrumptious. Fortunately, I never had to work for that planner again.